Catsurveys have just held their annual CATFEST, the event brought together all the employees across the company both from the UK and our Hungary office, to enjoy a fun filled day of BBQ’s / Bouncy Castles / Nonstop music / Unlimited Supply of alcohol…… and most importantly the most prestigious event of the day, the company football match England V Hungary.

You would be wrong in thinking that the biggest football game to be played on Saturday was England V Italy in the world cup; as once a year 2 teams are formed comprising of our Hungarian Employees as one team and the other our English Employees, both battle it out on the pitch in two 30 minute halves to decide who will lift the CATFEST football trophy and gain bragging rights for the rest of the year.

I can confirm that the England team really made an effort this year, and in true English form insisted that instead of stretching that it would be much more beneficial to have a few beers a burger and a cigarette to warm up……

An unusual tactic but it seemed to have the desired effect (at least for 10 minutes anyway).

Hungary, on the other hand, had held a team brief, were drinking water and I’m pretty sure had flown some professional footballers over disguised as CAD Technicians from our Hungary office….. Oh well at least the Ref was neutral…….. (I’ve seen less corruption in Qatar’s 2022 world cup bid!) Only joking Yuri!

England started off well and within a few minutes were 2-0 up, for the rest of the half it was a tight match and by half time Hungary had pulled back 2 goals along with England getting another making the score 3-2 to England going into the second half. In quick succession both teams got another goal making it 4-3, this wouldn’t have been an England game without a last minute goal from the opposing team and true to form England let in the equaliser from Hungary in the last 30 seconds of the game. 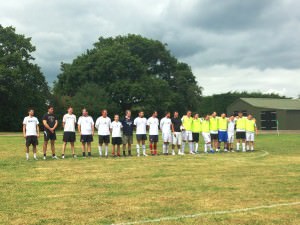 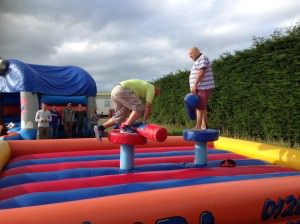 In extra time…… the game slightly changed, England started to trail for the first time in the game going 4-5 down, Hungary then put the dagger in with a final shot in the dying minutes of extra time to win this year’s CATFEST 6-4.

The game was not without its fair share of drama, In fact the company has sent 2 players from the match for auditions for the next series of SPLASH as their diving was so good! Not naming anyone…… (Sam and Peter)!

As always there were no hard feelings after the game and after the trophy was lifted by Hungary we got on with the 2nd most important part of the day…… Drinking Beer! And playing gladiator!

Unfortunately I’d like to be able to say England won this….. But Mark is Welsh!

Before I upload a ton of photos that are likely to embarrass 90% of our employees I would like to say a big thank you on behalf of everyone at Catsurveys to Janos, Dave and Viki, without them CATFEST would not be possible. I also need to extend our Thanks to those who were involved in the setting up and planning of the event it was a huge success and another great day was had by all. Not quite sure how you are going to top it next year!

The key message that can be taken from the event is that every employee at Catsurveys plays a part in this day; CATFEST can and will only happen because of the hard work and dedication each and every employee gives to the company on a daily basis.